I felt very honored to know that the VFP guru Rick Schummer presented a session - Visual FoxPro Reporting: XFRX vs. FoxyPreviewer in the 2022 version of VFF - Virtual Fox Fest. The organizers were very generous offering a recorded version of all sessions for free for the community in YouTube. 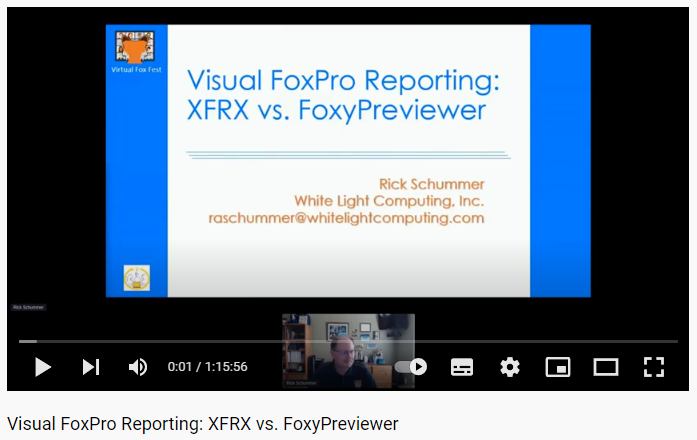 Rick very quickly and impartially shown some of the main features of both tools.

Regarding FoxyPreviewer, I have some few considerations or remarks. Of course it would be impossible or Rick to know all the possibilities and features available. I just want to make clear that I feel very thankful for the review. And I am totally aware that the documentation needs some updates, and some points could be better explained, so here I take the opportunity to try to clarify some points.

When I run my reports with FoxyPreviewer sometimes asterisks symbols ********************* appear instead of the field. This was originally working, before using FoxyPreviewerThat happens because FoxyPreviewer uses the SET REPORTBEHAVIOR 90 mode, that uses GDI+ to render the texts. Unfortunately there is a slight difference of the size of the strings between these modes. To fix it, just edit your report and enlarge that field!You can set the property - lExpandFields to make the report engine show the field numeric value ignoring the field size.Using "lExpandFields", FoxyPreviewer retrieves the value that overflowed and resends it to the report engine with an enlarged field width.This is a known issue, and Lisa Slater Nicholls wrote a short blog post regarding it:Why do report layouts in VFP9 need wider field/expression controls than in VFP8 and earlier?And here's another interesting text from Lisa, that explains the reason for that:

The Report Designer uses GDI - not GDI+ - to render the report layout components, including all the text strings that you see. So if you visually right-align a label report element, the report designer records the leftmost co-ordinates of the element (the text start position) in the layout.

The length of the string under GDI+ rendering will most likely be greater than what you would think, based on what you see in the Designer.